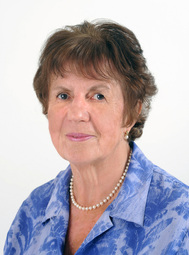 Dr. Oonagh McDonald, CBE, is an international financial regulatory expert. Her books, articles and speeches serve as guiding lights in a complex world.

Exciting news. I am now based in Washington DC near the Capitol. I moved to the US in January 2018 having been granted permanent residence in the US on the grounds of ‘exceptional ability’.

I am happily settled here, making many friends and meeting new people I am on the board of the Irish Network in DC since born of Irish parentage, I have both British and Irish nationality-yes, long before Brexit!

My latest book, 'Holding Bankers to Account' was published in March this year and in April in the USA.  More about that in the books section of my website.
​
I have just qualified as an arbitrator for FINRA, the Financial Industry Regulatory Authority. FINRA is an independent regulator of securities firms doing business in the USA. The broker-dealers buy and sell financial instruments, such as stocks and bonds on the open market, either on the firm’s own account or as an agent, when it executes orders on behalf of its clients. The arbitration panel is there to resolve disputes between broker-dealers and their clients.

Dr. McDonald has had a long and illustrious career:

She was a Member of Parliament for Thurrock in Essex (1976-87), becoming one of 27 female members of the 635-member Parliament at the time. She was also a member of the front-bench Treasury team from 1983-87, becoming the first woman to hold the post. Prior to her entry to Parliament, she was a lecturer in philosophy at Bristol University. In 1998, she was awarded a CBE (Commander of the British Empire, an honor awarded by the Queen on the advice of an independent Commission) for services to financial regulation and business.

Dr.McDonald chaired a public inquiry into property valuation in the UK from July 2013 to February 2014. Before that, she was a director of the Board for Actuarial Standards.  McDonald served as a member of the Gibraltar Financial Services Commission until May 2007, and a director of the British Portfolio Trust, Dresdner RCM Global Investors (UK) Ltd until February 2009.  She was also Complaints Commissioner for IC E Futures, and ICE Clear and formerly fulfilled a similar role for the London Metal Exchange and Virtex SWX, the Swiss exchange in London.  She was a director of the Securities and Investments Board and subsequently the Financial Services Authority from 1993 to 1998; the Investors Compensation Scheme from 1992-2001, a member of the Insurance Brokers Registration Council, a director of the General Insurance Standards Council from 1999-2005, a director of Skandia Insurance Co from 2001-2004 and a director of Scottish Provident from 1999 to 2001.

She is an international financial regulatory expert, and is the author of the McDonald report, Training and Competence in the Financial Services Industry, (May 1990), which led to the introduction of the training and competence regulations for the financial services industry in the UK.  As well as working on a large number of projects for UK financial services firms since 1990, she has also worked as an independent expert advising the Russian Federal Capital Markets Commission and as a member of a team funded by the Asian Development Bank advising on a capital markets project in Nepal and Sri Lanka as well as advising on pensions in Indonesia and Mongolia. More recently, she has worked as an independent expert advising the financial regulatory authorities in Ukraine and Moldova under the auspices of USAID.

In the early 2000's Dr. McDonald began taking more of an interest in the United States and the global financial crisis. As a result, she authored two books and several papers on the subject. Her insights and observations are helping regulators and the general public understand and fight financial crime.

McDonald is the author of a number of books and monographs:
Dr. McDonald can be reached at Oonagh@OonaghMcDonald.com​
©Copyright 2021 | Oonagh McDonald